Home for the Holidays

In a few hours, we will all be waking up in our respective houses to the smell of fresh coffee being brewed and the warmth of knowing we are surrounded by family. The last semester has been a blessing, and we are lucky to know new parts of the world and new people.

Although our experience abroad has ended for now, the impact of TIME will be measured continuously as the years roll on and we begin to make connections between our lives and our experiences in Turkey, Morocco, and Egypt. We hope this blog can provide insight for future TIME students considering the program, and serve to remind ourselves and our families how we spent the Fall of 2012.

Thank you for following our travels on the blog. Watching it accumulate an astonishing 25,000 views since August reminded us how much we are loved, and we couldn’t be more grateful for all of you for reading our posts.

As anyone on TIME will tell you, spending four months as students abroad in the Middle East is not always, in fact it is rarely, glamorous.  Of course, the positives of our experiences by far outweigh the negatives and in some cases, make the negatives simply humorous.   As our blog comes to an end and before TIME becomes likened to a utopian, dreamlike memory, I thought now would be an appropriate occasion to share with our faithful followers some of the lesser known, but all too frequent, moments of trip.  Call them what you will, whether it be “Behind the Scenes”, “Bloopers”, or simply “The Nitty Gritty Truth”, here’s a glimpse at life the last four months, and a few of the many very complicated, double-sided reasons were both grateful to be home and will forever miss life abroad. 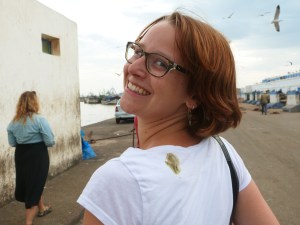 Sweat and dirty clothes were regular occurrences on TIME. Exemplified here: the hazards of bird…debris.

An excellent two-in-one example: eating McDonald’s after too many sardines and chicken shish and feeding cats, the latter of which we eventually learned not to do, and the former of which only increased in frequency. 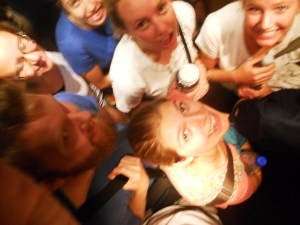 Perhaps the best example of TIME putting too many people in too small a place: when we crammed nine people into a four person elevator (unbeknownst to us) in a hotel in Alexandria, and it got stuck. Fortunately, the hotel staff was very nice and forgiving.

Sometimes we made our own entertainment, like chasing group members around with Shepard-staff-shaped sticks and trying to lift up skirts. What, you thought this trip would make us more mature?

Often times in hotels we stayed three-to-a-room. We can’t be sure, but we’re unconvinced many of them were designed to be triples. You be the judge. Double points if you can figure out how Mike even managed to get over there.

One of our favorite pastimes, especially during the last two months, was comparing bug bites. At the hotel in Hurghada, every day was like Christmas – we would eagerly anticipate greeting each other in the morning to find out what surprises we all had received from our bug friends while we slept. If Lauren’s Tthanksgiving gratitude for anti-itch cream confused you, now you know. 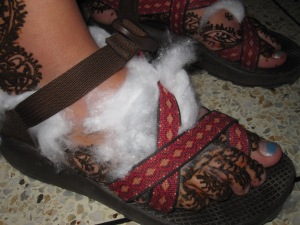 For the girls, henna was a lesson that even abroad, beauty comes at a cost. In this case, the cost was wandering around one night with cotton ball feet and sleeping with sock hands to keep the henna from coming off prematurely.

Yet another example of several TIME phenomena: sleeping wherever whenever and completely failing at doing homework.

Sleeping on buses was also a popular activity, in fact, on some longer excursion days, it was virtually the only activity.